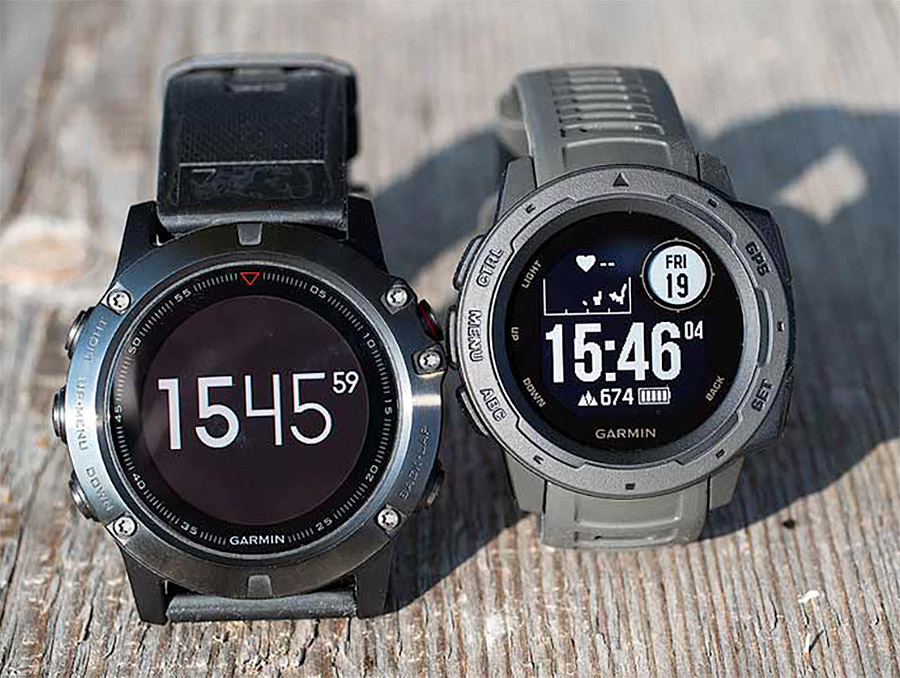 Garmin has established its brand as the provider of stylish smartwatches for adventurers. Unlike typical smartwatches, Garmin is not afraid of going for the rugged looks.

Garmin Instinct and Garmin Fenix are two of the most popular rugged watches with an very distinct price point. Comparing Garmin Instinct vs Fenix should be a basic skill to appreciate these watches.

At first glance, it is hard to distinguish between Garmin Instinct and Garmin Fenix. Both were designed as the strong, durable companions for adventurers and extreme sports enthusiasts.

They also have suitable designs for outdoor activities, although with quite diverse colour options, including bright shades.

The differences between Instinct and Fenix are subtle, but you can spot them from details in the designs, features, and tracking systems.

Knowing the detailed specs of each product will help you to make a more informed purchase decision.

Despite the subtlety, the differences determine the type of persons that will wear them (including their chosen activities).

Make sure the watch you choose matches your activities. This guide will help you to distinguish Instinct and Fenix, which leads to a more accurate option when purchasing a Garmin product.

Despite some bright colour options, both Instinct and Fenix have less flashy designs compared to other rugged watches.

Garmin Fenix comes with several version that you can choose from, with Garmin 6 as the newest one.

Both have silicone straps that are easy to put on, and their colours make people find you faster if you need help in a remote location.

However, when you place them side by side, you can see that Fenix is slightly bigger and thicker than Instinct.

Garmin Fenix has a 1.2-inch screen, while Instinct’s screen is only 0.9 inches.

Fenix also has more size options than Garmin, which make Fenix a perfect solution for big, medium-sized, and small wrists. Meanwhile, Instinct is more suitable for people with small to medium-sized wrists.

Despite some key differences in designs, both Instinct and Fenix don’t use touchscreen technology. Most of the Garmin adventure watches have five-button control systems that are placed on the bezels.

Details in Tracking and GPS Systems

Fenix and Instinct have similar GPS and tracking systems for different types of sports. Both are suitable for running, cycling, swimming, climbing, hiking, and diving.

Both watches can also withstand water up to 100m of depth. However, each watch has unique sports data in their systems.

Fenix is more suitable for snowboarding, paddle-boarding, and rowing. Golfers can also use Fenix to measure various aspects of their games.

Meanwhile, Instinct is more suitable for outdoor activities in the wild, like climbing and hiking. While Fenix and Instinct are both suitable for runners, Fenix has slightly better tracking systems when it comes to running.

The best things about these watches? They can measure your heart rate. If you have sleep-related problems, wear one of these watches at night to measure aspects of your sleep.

Garmin Instinct and Fenix both have compatibility with Android and iOS apps to control the watches from afar.

However, there is a difference in how both watches develop compatibility with Connect IQ Store, Garmin’s smart store that sells various features for its product series.

Fenix has more compatibility with the Connect IQ Store, allowing you to provide various changes and customisations.

Meanwhile, the Instinct is more traditional, with less compatibility with Connect IQ Store. Fenix also handles widgets well, something that Instinct doesn’t do.

Do you know that Fenix can answer a text message?

This ability is available in a limited scope, and you need Android phones to perform the function. However, Instinct doesn’t have this skill at all.

Details in Tracking and Mapping Visuals

Both Instinct and Fenix offer visuals to help you in tracking your location and its details. However, visual styles are very different.

Fenix has a coloured map and breadcrumb tracking style (for rugged, unknown, or local paths). Meanwhile, Instinct relies on waypoints and direction lines without maps.

Despite their differences, the best way to maximise the map tracking efforts in their systems is to input the coordinates.

This way, you can get information about your exact location, wherever you are.

The displays of Instinct and Fenix show subtle differences. The most obvious one is Instinct’s monochromatic display, which appears as a bold black and white combination.

If you look for resolution, Fenix is better than Instinct. The Fenix display has 240 x 240 pixels, while Instinct has 128 x 128 pixels.

If you look at them side by side, you will see the difference between the resolution quality, although Instinct holds its advantages and positive features quite well.

Many users agree that Instinct has a more “rugged” look compared to Fenix, but the differences don’t stop there. Garmin uses different materials in making the detailed features of Instinct and Fenix.

The most obvious difference is the bezel material. Instinct’s bezel is made of hard, fibre-reinforced polymer, while Fenix’s bezel is stainless steel.

Less obvious is the difference between the lens glasses. If Instinct only uses specially reinforced glass, Fenix has two versions: the reinforced glass and the sapphire crystal. The latter is more elegant and expensive, which gives Fenix an extra point in aesthetic.

Fenix has similar materials in its construction compared to Instinct. Both have silicone straps and reinforced polymer for the cases.

However, Fenix provides more options with special steel material for both the strap and the case.

On average, both Instinct and Fenix have 14-day battery life in a smartwatch mode.

However, Fenix offers more hours in its battery than Instinct, especially if you use the watches in an extremely long and challenging outdoor activity. Generally, Fenix has a slightly higher battery life than Instinct.

For example, if you turn on GPS all the time to navigate, the Instinct will run out of energy soon.

Garmin has a feature that allows the watch to save the battery life while turning on GPS all the time.

The feature is called UltraTrac, and it can save the battery life up to 40 to 60 hours without the GPS and heart rate tracking app. With this feature, Instinct can only last for 40 hours, while Fenix 60 hours.

When it comes to checking the training progress, Fenix is admittedly better than Instinct.

Fenix allows you to check the training history, compiling the results of previous training sessions.

Fenix also helps you to check the average fitness level trend. Instinct does not have these things.

Fenix goes further by tracking the training load from the last of seven weeks. The watch will read your loads and analyse them further. Again, Instinct is absent from this useful feature.

Both Instinct and Fenix may have running measurements. However, Fenix takes them to the next level by providing more detailed info about your run measurements.

For example, Fenix can measure the “bouncing” level in your running. The reports are useful to compare the effectiveness of your running routine.

Another great feature is a tool to measure the impact and the length your feet stay on the floor.

The results are useful to analyse the effectiveness of your running. However, you need a special, compatible app to do it.

Both Instinct and Fenix have similar abilities in counting heart rates. However, Fenix takes it further by measuring the actual stress level.

The watch measures heart rates in several different responses, giving you a visual aid to see that this is brad.

Instinct doesn’t have this ability. However, you can only provide the stress level checking if you have a compatible app and phone for this purpose.

Which One Do You Choose?

After seeing several basic differences between the two rugged watches, it is possible to choose Fenix, because it offers more features so far.

Meanwhile, Instinct is slightly weaker in several aspects, although you can still rely on it to tackle difficult paths.

If you are a serious, avid extreme sports enthusiast, you should invest in Fenix. It offers stronger materials yet more elegant look in its design. Meanwhile, if you only have a limited budget, stick with Instinct.

Garmin Instinct vs Garmin Fenix has some similarities, but there are several noticeable designs.

In the end, they both do their jobs properly as the new generation of smartwatches.